I teach American history at the University at Albany. I teach the second-half of the American history survey course that covers 1965 to the present. As a history department instructor I am subject to several types of course evaluations from my students, two of them from the university and department respectively, and three from the structure of my course. I ask my students what they found most interesting, for a frank critique of my course structure, and their guess of my political persuasion. Yes. I ask my students, on the last day of class, if they can guess my political persuasion based on the way I taught the class. Specifically, I asked my students if I was a liberal or a conservative, and for evidence indicating why they think so.

The results were revealing: 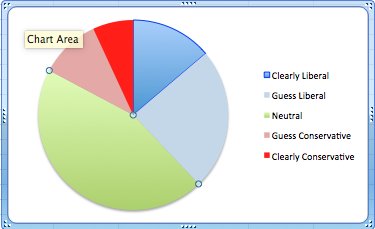 “but you appreciate that good ideas from the other side exist”

“you seem open to new policies that you discussed in class”

“your love and passion for civil rights, and your emphasis for achieving freedom in this country”

“based on the way you taught the class”

Guess Liberal (gives no evidence, or shaky evidence to support their guess) – 7

“Democratic because I just guessed, I don’t think you really showed any bias throughout the course”

“I would say liberal because of being a teacher (stereotyping, I know)”

“Because you give help during office hours”

“you are neither democratic or republican….but your political stance is liberal…being on the equality and liberty side”

“Independent because you never leaned towards one specific side of politics”

“I don’t know, don’t think your teaching has reflected your politics”

“You are either a democrat or a republican”

“you play devil’s advocate for a lot of political standings, I’d say you were more independent”

“You haven’t really been outspoken on any issues”

“you can’t be biased while teaching a class, which you’ve done a good job of”

“There were a lot of instances where I feel you could have been biased, I never felt as if you were pushing your ideas on us”

Guess Conservative (gives no evidence, or shaky evidence to support their guess) – 3

“I’m not sure but maybe conservatism side?”

“I think you like things to stay the same”